Described as an island in the sky, one of the most mystical and old rock formations in the world – Mount Roraima is located on the border of Brazil, Venezuela and Guyana. This giant flat-topped mountain appears as if carved from a single, monolithic rock formation which has vertical walls with smooth surfaces. Roraima is one of the few table-top mountains in the world. Table-top mountains exist only in South America – in the Guiana highlands.

Indigenous population of the region believed that table-top mountains were meant to serve as houses for their gods. The definition of the table-top mountains in local indigenous Pemon language is tepui, i.e. “the house of gods”. Mount Roraima, the tallest of the table-top mountains is almost always surrounded by whitish clouds and mist that gives it a magical and mystical appearance. The local Indians used to call the mountain “the navel of the earth”. According to their beliefs the progenitor of all people – the mother goddess lives at the very top of the mountain. The mountain is connected to the majority of the myths and legends of locals. 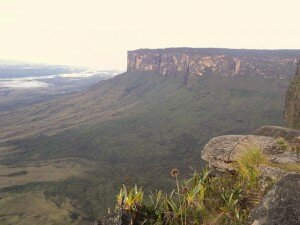 This mountain is one of the most unique natural rock formations on the Earth not only because of its form but also because of its origin. Tepuis are believed to be the remains of a large sandstone plateau that once was lying between the northern border of the Amazon Basin and Orinoco, between the Atlantic coast and the Rio Negro. The tepuis were formed as a result of changes in the Earth’s surface. Most probably they were formed when the continents drifted apart several billion years ago and South America was separated from West Africa.

The uniqueness of Mount Roraima has created grounds for numerous hypotheses. Arthur Conan Doyle used Roraima as the inspiration for his novel the “Lost World, a tale of modern dinosaurs”. His novel was inspired by the hypothesis that the endemic fauna and flora of tepuis represent remnants of ancient species from the age of dinosaurs. Other hypotheses claim that the mountain is not a natural formation but rather has an artificial origin. Even today some people believe that it was built by an unknown highly developed civilization that existed on earth several billion years ago.

For a long time scientists believed that there are no caves in Roraima, however in 2003 one of the world’s largest system of quartz caves was discovered here. It is called Cueva Ojos de Cristal, which translated from Spanish means “the cave of crystal eyes.” The system is located on the Venezuelan side of the mountain in the Canaima National Park. It extends for nearly 11 kilometers in length and descends to a depth of 72 meters below the surface of Roraima.

The highest point of Roraima is 2810 meters, while its clean prominence is 2338 meters. The plateau on the summit of Roraima has an area of around 30 square kilometers.

It is almost always raining on the peak of Roraima. The summit of the mountain has unique flora and fauna. Many of the plants existing on the summit are unique and were developed in complete isolation. This is a botanical paradise for scientists. Almost every plant here is unique and many of them are surviving by consuming insects. The cloud forests of the plateau are home to many birds: hummingbirds, tiny parrots, nocturnal oilbirds, etc.

About the fifth of the plateau is covered by water. From the breathtaking cliffs of the mountain probably the most ancient waterfalls in the world are falling down. Bright pink puddles, peat swamps, pristine lakes and fast rivers can be found here. Even natural tubs with crystal bottoms known as jacuzzis, as if specially designed for swimming, can be found here. There are several chains of massive caves with open ends inside the rock of the mountain. Several billion years ago underground rivers were flowing through these caves.

Mount Roraima and its summit are indeed a lost and completely isolated world, where the time has not changed much during the last several million years. 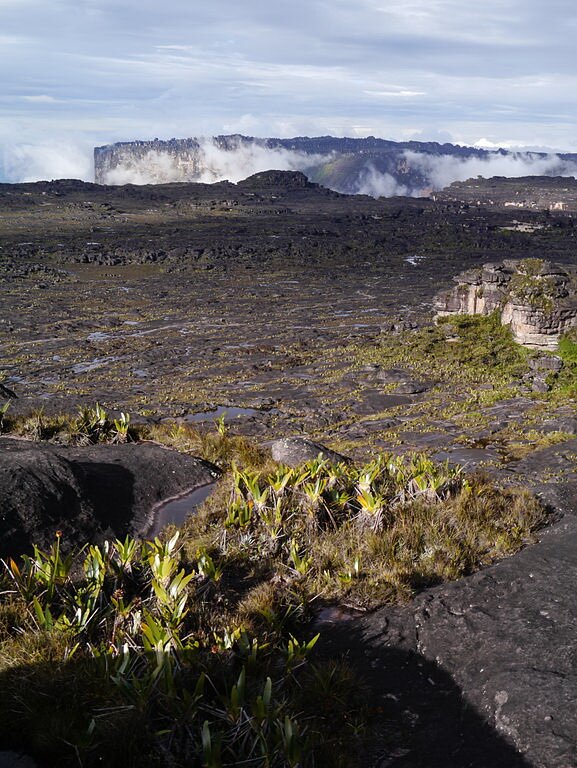